. In other words, the random variable takes on positive real numbers larger than some fixed positive parameter

. On the other hand, Pareto Type II distribution can take on any positive real number. However, the two types are mathematically related. Their density functions have the same shape (if they have the same parameters).

and the scale parameter is

Note that the green density curve is the result of shifting the red curve horizontally 5 units to the left. The following are the density functions.

From the diagram and the density functions, we see that the green density curve is the result of shifting the red curve to the left by 5. Otherwise, both curve have the same distributional shape.

Since Pareto Type II is a shifting of Pareto Type I, they share similar mathematical properties. For example, they are both heavy tailed distributions. Thus they are appropriate for modeling extreme losses (in insurance applications) or financial fiasco or financial ruin (in financial applications). Which one to use depends on where the starting point of the random variable is.

However, the mathematical calculations are different to a large degree since the Pareto Type II density function is the result of a horizontal shift.

Another important mathematical property of Pareto Type II is that it is the mixture of exponential distributions with gamma mixing weights (exponential-gamma mixture). This is also discussed in the highlighted blog posts.

We take a closer look at the mean excess loss function. We start with the following example:

Example
Suppose that an entity is exposed to a random loss

. An insurance policy offers protection against this loss. Under this policy, payment is made to the insured entity subject to a deductible

, no payment is made to the insured entity, and when the loss exceeds

, the insured entity is reimbursed for the amount of the loss in excess of the deductible

The two questions look similar. The difference between the two questions is subtle but important. In the first question, the average is computed over all losses that are eligible for reimbursement (i.e., the loss exceeds the deductible). This is the average amount the insurer is expected to pay in the event that a payment in excess of the deductible is required to be made. So this average is a per payment average.

. Thus the average is the average amount the insurer has to pay per loss. So the second question is about a per loss average.

is the random loss and

. The mean excess loss variable is the conditional variable

and the mean excess loss function

The mean excess loss function is computed by the following depending on whether the loss variable is continuous or discrete.

is defined only when the integral or the sum converges. The following is an equivalent calculation of

that may be easier to use in some circumstances.

, we assume that the support of

is the set of nonnegative integers. In

, we assume that the deductible

is a positive integer. In

is free to be any positive number and

is the largest integer such that

is obtained by using integration by parts (also see theorem 3.1 in [1]). The formulations of

is the function that assigns the value of

and otherwise assigns the value of zero.

is calculated over all losses. When the loss is less than the deductible

, the insurer has no obligation to make a payment to the insured and the payment is assumed to be zero in the calculation of

. The following is how this expected value is calculated depending on whether the loss

is continuous or discrete.

Based on the definitions, the following is how the two averages are related.

, the limited loss variable is defined by

is called the limited expected value. In an insurance application, the

is a policy limit that sets a maximum on the benefit to be paid. The following is how the limited expected value is calculated depending on whether the loss

is continuous or discrete.

Interestingly, we have the following relation.

The above statement indicates that purchasing a policy with a deductible

is equivalent to buying full coverage.

Another way to interpret

and the expected amount the insurer is expected to pay is

. By having a deductible provision in the policy, the insurer is now only liable for the amount

is the expected amount of the loss that is eliminated by the deductible provision in the policy. The following summarizes this observation.

be exponential with pdf

. Because of the no memory property of the exponential distribution, given that a loss exceeds the deductible, the mean payment is the same as the original mean. Thus

. Then the per loss average is:

Thus, with a deductible provision in the policy, the insurer is expected to pay

per loss instead of

. Thus the expected amount of loss eliminated (from the insurer’s point of view) is

and the shape parameter is

. The insurer’s expected payment without the deductible is

For the losses that exceed the deductible, the insurer’s expected payment is: 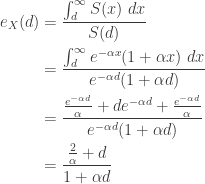 Then the insurer’s expected payment per loss is

With a deductible in the policy, the following is the expected amount of loss eliminated (from the insurer’s point of view).

has a Pareto distribution with the following pdf:

If the insurance policy is to pay the full loss, then the insurer’s expected payment per loss is

provided that the shape parameter

is larger than one.

plus a component that is increasing in

be a continuous random variable with pdf

. Then the resulting distribution for

is called an inverse. For example, if

has an exponential distribution, then

is said to have an inverse exponential distribution. The following are the cdf and pdf of

We now show that the Pareto distribution is an inverse. Suppose that

has a Pareto distribution with scale paramter

. Once this base distribution is established, we can relax the scale parameter to have other positive values.

. Since the support of

. Thus in deriving the cdf

, we only need to focus on

). The following is the cdf

Upon differentiation, we obtain the pdf:

. However, the support of this pdf is

. In order to have

as the support, we have the following alternative version:

We now transform the above pdf to become a true 2-parameter Pareto pdf by relaxing the scale parameter. The result is the following pdf.

Update (11/12/2017). This blog post introduces a catalog of many other parametric severity models in addition to Pareto distribution. The link to the catalog is found in that blog post. To go there directly, this is the link.

is the scale parameter and

is the shape parameter. The following lists several other distributional quantities of the Pareto distribution, which will be used in the discussion below.

follows an exponential distribution (conditional on a parameter value

). The following is the conditional pdf of

There is uncertainty in the parameter, which can be viewed as a random variable

. The following is the pdf of

The unconditional pdf of

is the weighted average of the conditional pdfs with the Gamma pdf as weight. 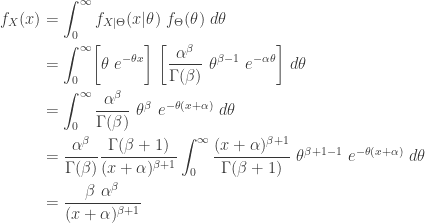 In the following discussion,

is capped by the shape parameter

. In particular, the mean

does not exist for

. If the Pareto distribution is to model a random loss, and if the mean is infinite (when

), the risk is uninsurable! On the other hand, when

, the Pareto variance does not exist. This shows that for a heavy tailed distribution, the variance may not be a good measure of risk.

For a given random variable

, the existence of all moments

, for all positive integers

, indicates with a light (right) tail for the distribution of

. The existence of positive moments exists only up to a certain value of a positive integer

is an indication that the distribution has a heavy right tail. In contrast, the exponential distribution and the Gamma distribution are considered to have light tails since all moments exist.

). The two survival functions are set to have the same 75th percentile ( 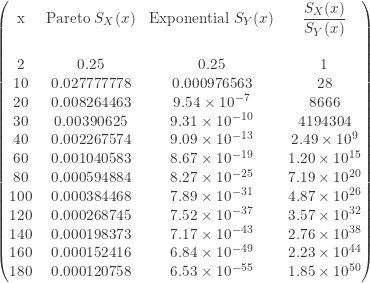 Note that at the large values, the Pareto right tails retain much more probability. This is also confirmed by the ratio of the two survival functions, with the ratio approaching infinity. If a random loss is a heavy tailed phenomenon that is described by the above Pareto survival function (

), then the above exponential survival function is woefully inadequate as a model for this phenomenon even though it may be a good model for describing the loss up to the 75th percentile. It is the large right tail that is problematic (and catastrophic)!

In the above ratio, the numerator has an exponential function with a positive quantity in the exponent, while the denominator has a polynomial in

. This ratio goes to infinity as

In general, whenever the ratio of two survival functions diverges to infinity, it is an indication that the distribution in the numerator of the ratio has a heavier tail. When the ratio goes to infinity, the survival function in the numerator is said to decay slowly to zero as compared to the denominator. We have the same conclusion in comparing the Pareto distribution and the Gamma distribution, that the Pareto is heavier in the tails. In comparing the tail weight, it is equivalent to consider the ratio of density functions (due to the L’Hopital’s rule).

of a random variable

is defined as the ratio of the density function and the survival function.

will die in the next instant. The hazard rate is called the failure rate in reliability theory and can be interpreted as the rate that a machine will fail at the next instant given that it has been functioning for

units of time. The following is the hazard rate function of the Pareto distribution.

Thus if the hazard rate function is decreasing in

, then the survival function will decay more slowly to zero. To see this, let

, which is called the cumulative hazard rate function. As indicated above, the survival function can be generated by

is decaying to zero much more slowly than

. The property owner buys an insurance policy with a deductible

if a loss occurs with

. The insuerer will pay nothing if the loss is below the deductible. Whenever a loss is above

, what is the average claim the insurer will have to pay? This is one way to look at mean excess loss function, which represents the expected excess loss over a threshold conditional on the event that the threshold has been exceeded.

Given a loss variable

and given a deductible

, the mean excess loss function is

. For a continuous random variable, it is computed by

Applying the technique of integration by parts produces the following formula: