The previous post called The Negative Binomial Distribution gives a fairly comprehensive discussion of the negative binomial distribution. In this post, we fill in some of the details that are glossed over in that previous post. We derive the following points:

is a positive real number and

. The first two versions arise from the case that

is a positive integer, which can be interpreted as the random experiment of a sequence of independent Bernoulli trials until the

th success (the trials have the same probability of success

). In this interpretation, there are two ways of recording the random experiment:

the number of Bernoulli trials required to get the

is the probability of success in each Bernoulli trial. The notation

is the binomial coefficient where

are non-negative integers and

With this in mind, the following are the probability functions of the random variables

The thought process for (1) is that for the event

to happen, there can only be

successes in the first

trials and one additional success occurring in the last trial (the

th trial). The thought process for (2) is that for the event

to happen, there are

successes). In the first

trials, there can be only

. Thus knowing the mean of

will derive the mean of

, a fact we will use below.

Instead of memorizing the probability functions (1) and (2), it is better to understand and remember the thought processes involved. Because of the natural interpretation of performing Bernoulli trials until the

th success, it is a good idea to introduce the negative binomial distribution via the distributions described by (1) and (2), i.e., the case where the parameter

is a positive integer. When

, the random experiment is a sequence of independent Bernoulli trials until the first success (this is called the geometric distribution).

Of course, (1) and (2) can also simply be used as counting distributions without any connection with a series of Bernoulli trials (e.g. used in an insurance context as the number of losses or claims arising from a group of insurance policies).

The binomial coefficient in (0) is defined when both numbers are non-negative integers and that the top one is greater than or equal to the bottom one. However, the rightmost term in (0) can be calculated even when the top number

is not a non-negative integer. Thus when

is any real number, the rightmost term (0) can be calculated provided that the bottom number

is a positive integer. For convenience we define

. With this in mind, the binomial coefficient

is defined for any real number

and any non-negative integer

just discussed. With this in mind, the probability function in (2) can be defined for any positive real number

is a positive integer, versions (2) and (3) are identical. When

is a positive real number but is not an integer, the distribution cannot be interpreted as the number of failures until the occurrence of

th success. Instead, it is used as a counting distribution.

The probabilities sum to one

Do the probabilities in (1), (2) or (3) sum to one? For the interpretations of (1) and (2), is it possible to repeatedly perform Bernoulli trials and never get the

, is it possible to never even get a success? In tossing a fair coin repeatedly, soon enough you will get a head and even if

is a large number, you will eventually get

number of heads. Here we wish to prove this fact mathematically.

To show that (1), (2) and (3) are indeed probability functions, we use a fact concerning Maclaurin’s series expansion of the function

, a fact that is covered in a calculus course. In the following two results,

is a fixed positive real number and

is any non-negative integer:

. We first derive these two facts and then use them to show that the negative binomial probabilities in (3) sum to one. The following derives (4).

. Based on a theorem that can be found in most calculus text, the function

. Now, filling in the derivatives

, we have the following derivation. 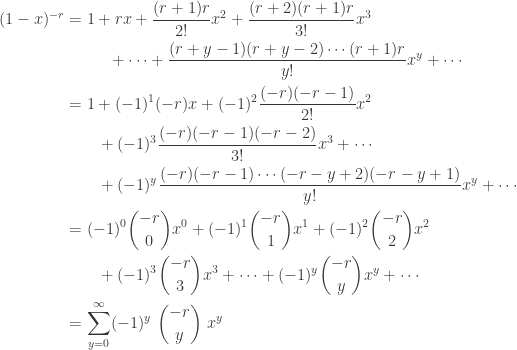 We can now show that the negative binomial probabilities in (3) sum to one. Let

over all real numbers

is defined. The following derivation does the job. 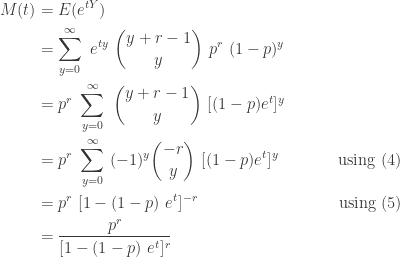 The above moment generating function works for the negative binomial distribution with respect to (3) and thus to (2). For the distribution in (1), note that

. To summarize, the moment generating functions for the three versions are:

is defined and is positive. Based on the form that it takes, we focus on making sure that

. This leads to the domain

The mean and the variance

. For the distribution represented by the probability function in (3), we calculate the following:

After taking the first and second derivatives and evaluate at

, the first and the second moments are:

The following derives the variance. 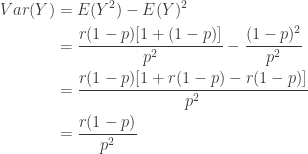 . The moment generating function uniquely identifies the distribution. The above

is that of a negative binomial distribution with parameters

A special case is that the sum of

. The following is the moment generating function of the sum

2 thoughts on “Derive some facts of the negative binomial distribution”